Like everywhere else in Europe, mail and small parcels left the railroad in the 1990s, as in many countries, except Switzerland. The parcel segment under 50kg is today, in Italy as everywhere else, in full growth and has become a lucrative business both for small independents who deliver at home, but also for some very large integrators, like DHL, Fedex, UPS or TNT, and more recently Amazon. Highly specialized with hugh resources available, these big global companies were captured the old market of the railways. Today, Italy could show a new way.

For this particular and innovative service, an ETR.500 (now classed ETR M-01 Fast), consisting of the two engines E.404.514 and 516, and its 12 passenger cars were emptied of their seats in the workshops of Vicenza and Voghera. The air conditioning system and static converters for 220 Volt production for onboard services and power outlets have been removed. This lightering had to be offset by 3.6 tons of ballast to maintain stability. The wagons are equipped with a fire suppression system that complies with the specifications of the TSI 2014 by means of two fire extinguishers and special ceiling mounted smoke detectors. There are also two cameras per vehicle, connected to a screen in the driver’s cab. The lighting is made by neon tubes arranged longitudinally along the ceiling. 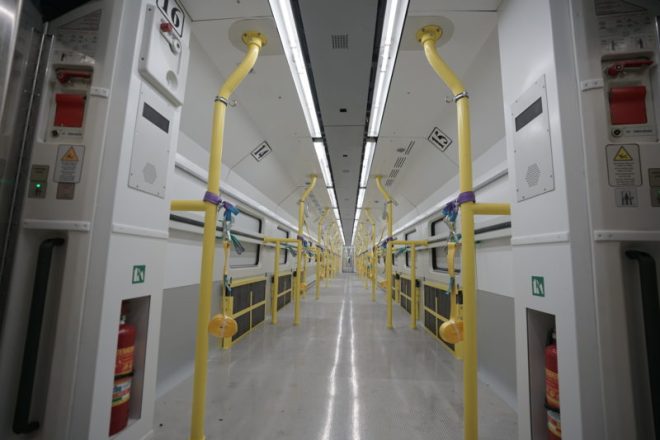 These new trains are designed to transport time-sensitive products for customers such as express couriers, logistics operators, producers, distributors and real estate developers. The transport capacity, equivalent to 18 semi-trailers or two Boeing 747s, is divided into 12 cars … now called wagon! Each … wagon has 17 loading areas called « racks » and numbered progressively from 1 to 17, for a total of 60 containers (71x80x180), approximately 1m3 or 250 kg, easy and fast to load and unload. This maintains the 17 tonnes at the axle required on high speed line. Yellow tubular structures delineate the rack and allow anchoring of the containers with special ratchet straps supplied to each container. The standard load capacity is 7 tonnes per vehicle, but in case of transport of heavier goods, it is possible to remove the ballast.

The train runs between the terminal Maddaloni-Marcianise (Caserta near Naples) and Bologna Interporto, in 3h20. The train leaves in the evening from Caserta to arrive at destination around 0h10. After 3 hours of handling, he returns to her point of origin for an arrival around 6am. We see that these trains run at night on Italian high-speed lines. In ordinary operation, the Mercitalia Fast will be driven by two train drivers without change or intermediate stop between Maddaloni Marcianise and Bologna and vice versa.

Although the rolling stock was officially sold by Trenitalia to Mercitalia Rail, the maintenance will remain the responsibility of Trenitalia. Therefore, the ETR M-01 joins the Gianturco workshop in Naples every weekend for routine maintenance, after a weekly distance of about 6,000 km. Although the project is suitable for a maximum speed of 300 km / h, it was decided to limit the ETR.500 M-01 to 250 km / h. For driving E.404 with ERTMS signaling on AV lines (Alta Velocita), 12 Mercitalia Rail machinists were trained for several weeks with the support of their colleagues from Trenitalia Frecciarossa.

Tgroup, an express mail company, is partnering with Mercitalia Fast to collect, distribute, plan and coordinate the first and last kilometers. Mercitalia is in charge of the operational rail component. At the terminals, the loading and unloading operations of the rolling containers are carried out by 12 removable bridges that connect the warehouse dock to the floor level of the train. The operations are therefore carried out only by a single door. 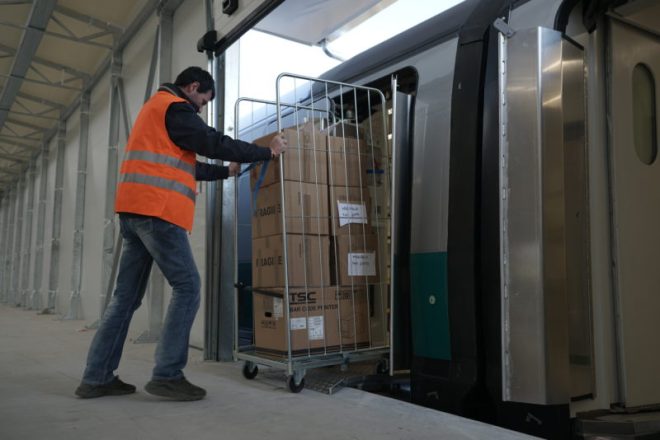 In the north, Interporto Bologna, one of the largest intermodal logistics hubs in Europe, is home to more than 120 industrial logistics and freight transport companies and three rail terminals. The development of intermodal rail services for all types of goods and the needs of customers is one of the main objectives of the Corporation, which also aims to increase the level and quality of services offered to its residents. Mercitalia Fast enhances an already well-structured service offer in the railway sector, which covers all types of containers with connections to the main Italian ports and many foreign destinations.

Mercitalia estimates that its new service could remove nearly 9,000 trucks on the highly charged A1 ‘autostrada’, which would reduce carbon dioxide emissions in the atmosphere compared to the road transport mode of about 80%.

The programs for the future of Mercitalia Rail are ambitious: after the first break-in of this first service, the operator of the FS group does not exclude the transformation of other trains of this type into Mercitalia Fast in order to expand the service on new routes.

Mercitalia Fast was recently awarded the Logistics Award of the Year by Assologistica. We are now very curious to see if the Mercitalia FAST train will become the new Fedex of rail …