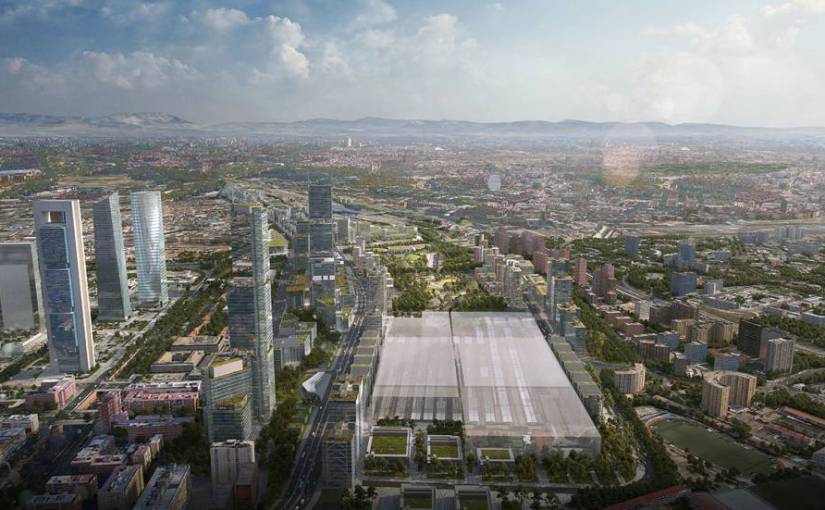 The existing Chamartín train station is called to become one of the most modern in Europe and a cornerstone for the future of Madrid, under the impetus of the ‘Madrid Nuevo Norte’ urban development project.

Madrid Chamartín is the name of the second major railway station in Madrid, and is well know by those who came from France via Bordeaux. Until years 90/2000, two famous night trains came from Paris : the ‘Puerta del Sole‘, which was a train with sleeping-cars and couchettes which changed bogies in Irun, and the Talgo night train ‘Fransisco de Goya‘, more confortable. Today, these trains have disappeared, and Chamartin station today manage Spanish domestic traffic only, with the exception of the few trains to Lisbon.

Positioned on the north side of the city, it was built between 1970 and 1975, although subsequent work would be carried on into the early 1980s. At that time it superseded Atocha station, located closer to the city centre. After Atocha itself was rebuilt in 1992, Chamartin lost much of its importance, even though since 2004 it has undergone changes to accommodate the new high-speed lines towards north of the country.

The station has a dozen long dead end tracks with a main front building, while a first 7,900 m tunnel called ‘Risa’ allowed the junction with Atocha station for commuter and long distance North – South traffic. The arrival of high speed on December 22, 2007 from Segovia and Valladolid motivated the creation of a six-tracks 1.435mm complex on the right side of the station. In 2008, a second tunnel under the city was bored on 8,254 m to operate the Cercanias C1, C2, C3, C4, C7, C8 and C10 train services.

With the extension of the new lines towards Leon, Zamora, Ourense and the Basque Country, additional capacity is needed at Chamartín to cope with the steady expansion the high-speed network in northern Spain. A third tunnel for UIC standard-track high-speed trains links Chamartín to Atocha station, thus enabling future high-speed services to and from Seville, Malaga, Toledo, Alicante and Valencia. Although its construction was completed in 2011, considerable delays due to the country’s economic crisis postponed commissioning to at least 2020.

Adif has already included this third tunnel in the network declaration for the liberalization of passenger traffic as it has established that the trains that come from Levante will have the terminal in Chamartín instead of Atocha. Thus, this tunnel will allow a train that comes from La Coruña or Léon to continue to the south without stopping in Atocha, which will be better optimize its management.

However, the station building and its platforms remain to be reconstructed. A major plan of €237.6 million was decided to reshape the Chamartin station. It provides that the station to be expanded east over the terrain currently occupied by Renfe’s headquarters, where 10 more platforms will be added to reach a total of 31.

But the station would no longer be isolated as shown in the photo above, which looks more like an airport in the city. As in Amsterdam or Birmingham, we no longer renovate major main stations without associating a renovation or reconstruction of the neighborhood.

A city without urban planning is a dead city, it is often said. « Madrid Nuevo Norte« , considered as one of the largest urban renewal projects in Europe, will make Chamartin train station and its surroundings a new type of business district. The project, first mooted in 1993, has been mired in political strife with subsequent city administrations battling to get it passed. In July 2019, after almost 25 years of delay, the political parties Plus Madrid, PP, Cs, PSOE and Vox, despite their great ideological differences, voted in favor of the urban development project which will allow the construction of 10,500 housing units. 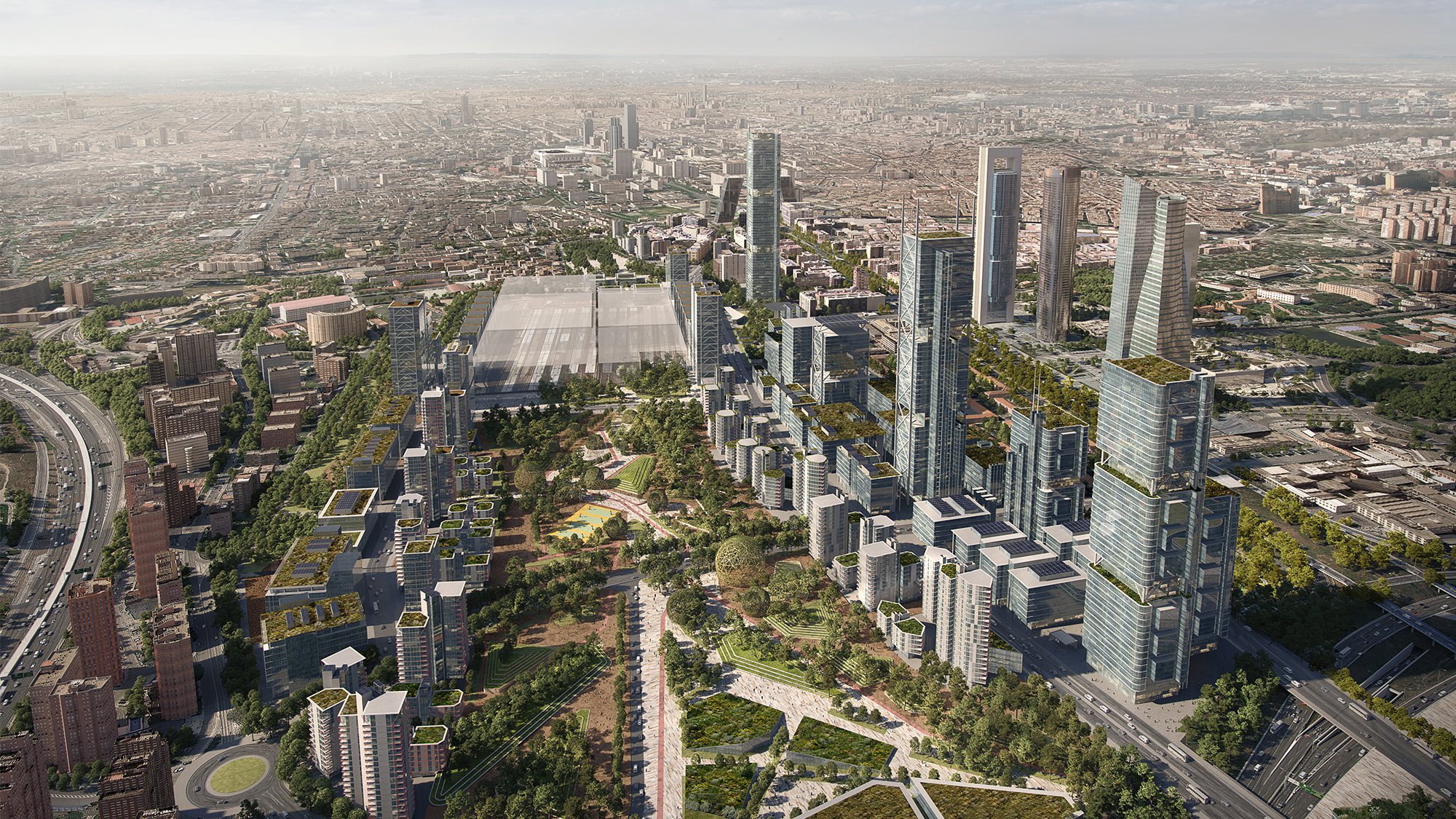 With his 5.6 km long , the real estate operation provides 1.6 million m2 of offices and shops and 1 million m2 of residential buildings. The project has been modified to ensure 80 percent of transport needs can be met by public transport with three new metro stations planned – Centro de Negocios, Fuencarral Sur and Fuencarral Norte – a new bus route and 15km of cycle lanes. « We have put sustainability and sustainable mobility at the forefront, » explained Javier Herreros, one of the architects behind the project. Ultimately, in its daily operation, the new district would provide 94,000 jobs and its population would number 27,500 inhabitants. But there are 25 years of work! We will see to what extent all of this will become reality because, for the moment, we are only satisfied with a model and artists’ drawings.

The station, which is not strictly speaking part of « Madrid Nuevo Norte« , could see part of the railway tracks covered with a roof slab on which would be created an urban park of 13 hectares. Greening the city is very trendy, but we may perhaps regret this choice to hide the railway, which goes against the current of architectural trends in Spanish and even global railway stations, which are today called to be « open to the city » and to be luminous. We must hope not to repeat this black hole that represents Barcelona-Sants, a soulless station. But it is too early to say what the final choice will be.

Adif, the infrastructure manager who owns the station, is expected to launch a new international tender to rebuild the building, at an estimated cost of 966 million euros. One of his objectives is to adapt to urban modes, with particular attention to carsharing, scooters or bicycles, new elements that we did not even think of 10 years ago. The new traffic plan, which will be underground, does not seek to allow a quick exit from the city, but simply to relieve traffic. With the construction of the park, the objective is that, after these works, the historic barrier between the districts on both sides of the railway station will be removed and that the district will be enterely designed for pedestrians.

The delay accumulated to launch the invitation to tender is mainly due to:

Major infrastructure works will make Chamartín station a hub that will reduce car travel by 15% thanks to its proximity to the business center and the construction of new metro stations, which will make it possible to reverse the model mobility. “Now we have 80% of trips by private car and 20% by public transport, we will reverse this trend with 70% of trips by public transport and 30% by car. In the future, the proportion will even be 80 to 20 ”, underlines an urban planning consultant. Chamartín station will cease to be an « airport in the city » as the engineers of the 1970s had designed it. 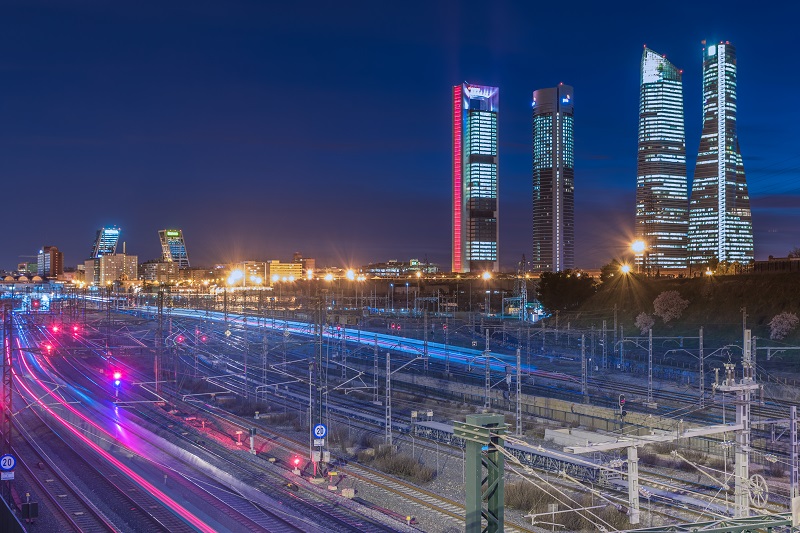