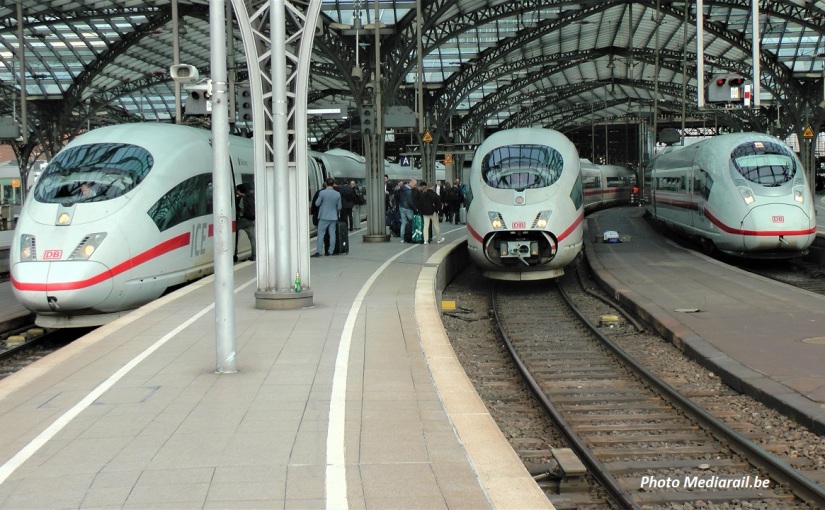 Good results for the operator Kombiverkehr
23/06/2022 – In the 2021 financial year, Kombiverkehr saw a gain of 9.3 per cent and a total of 937,959 (1.88 million TEU) truck consignments shifted by rail. This corresponds to a total of 22.16 million gross tonnes. Transport output actually improved by 10.2 per cent to 18.46 billion tonne-kilometres, with consignments transported an average distance of 833 km. The company achieved sales of 421.9 million euros in 2021. Significant gains were realised in the National and International Transport business fields.

New phase in sight for Alstom’s autonomous train in Germany
10/06/2022 – The research project “Automated regional trains in Lower Saxony, Germany” is entering the next phase. Together with the German Aerospace Center (DLR) and the TU Berlin, Alstom is developing technical solutions to gradually digitise rail passenger transport in Germany. The project will explore the possibilities of automation in regional transport via the European Train Control System (ETCS). The Landesnahverkehrsgesellschaft Niedersachsen (LNVG) supports the project and is providing two regional trains for the tests.

Thalys: 25 years old and a future to consolidate
06/06/2021 – Since the 1980s, a project for an international high-speed train had been in the making. In October 1987, a political decision in Brussels was made to build a high-speed network between France and northern Europe, including the Netherlands, Germany and the UK. Now Thalys have 25 years old.

Happy birthday, InterCity Express
30/05/2021 – 10 years after the launch of the first high-speed train in France, Germany launched its own high-speed train called « InterCity Express » (ICE). This is an opportunity to look back at the German concept, which differs from the French options. The arrival of the ICE has allowed Deutsche Bahn – and Siemens -, to become one of the world’s leading high-speed railways.

D-Takt: the great challenge of the clockface timetable 1/2
05/09/2021 – A train every half hour from city to city and from village to village. Convenient transfers without long waiting times, even in the countryside. Riding a train anywhere in the country would be as easy as riding the S-Bahn in the cities today. This second part will detail the impact of the clockface timetable service on journey times between the major German cities and the place reserved for new entrants.

D-Takt: the great challenge of the clockface timetable 1/2
05/02/2021 – A train every half hour from city to city and from village to village. Convenient transfers without long waiting times, even in the countryside. Riding a train anywhere in the country would be as easy as riding the S-Bahn in the cities today. It is the Deutschlandtakt, the german’s clockface timetable.

How Alstom wants to force mainline competition in Germany
02/22/2021 – DB has very little competition in the mainline segment and mainly opts for the same supplier. However, a manufacturer would like to change this in order to shake up the homeland of Siemens.

How to reconnect three million Germans to the train
07/09/2020 – SAccording to Allianz Pro Schiene and the Verband Deutscher Verkehrsunternehmen (VDV), the reactivation of 238 lines with a total length of 4,016 km would reconnect almost 291 municipalities totalling three million German citizens to rail.

When a region buys his own trainsets
06/28/2020 – The German Railway Act allows a lot of things. In particular the possibility for a Land to purchase its own trainsets from the manufacturer of its choice, which it then leases to dedicated operators. A good idea that gives the Land a strong control over his railway policy.

Germany : when Deutsche Bahn helps the road sector
05/12/2019 – DB Schenker, the logistics subsidiary of Deutsche Bahn, is a partner in a platooning trucks project on a motorway. The first results were made public in Berlin.

From everywhere to everywhere. The future clock-face schedule in Germany
08/10/2018 – The clock-face schedule has often revealed his attraction for customers. If it is usual in Germany, it is not perfect, with sometimes too much delay between the Intercity and the regional traffic. The federal government has just made the decision to better coordinate the national traffic with those of the different Lander. Project name: Deutschland Takt.

The ecological train: everyone does it
09/16/2018 – Is this the Innotrans effect? In recent months, hybrid Emu/Dmu have made a sudden appearance on the market. All the builders build their solution to attract the new market : the lines without catenaries. We are going to peruse the latest innovations on this theme.

Berlin/Brandenburg : six railway enterprises and many projects
09/11/2018 – More space, more comfortable trains, faster and better connections, for passengers, Berlin-Brandenburg’s new transport plan includes many projects that will improve passenger rail transport in the years to come. On 4 October 2017, the Lander of Berlin and Brandenburg signed with Deutsche Bahn AG the framework agreement « i2030 » for the development of rail transport in Berlin and Brandenburg.

How the Ruhr region manages his railways ?
02/28/2016 – Each year, the Transport Authority of the Ruhr region publish its barometer on best railways and the worse. This is a good example of rail transport policy governance