Sometimes there are small phrases that deserve to be meditated on, rather than going through whole seminars of theoretical background and conventional talks. Let’s get straight to the point. Is logistics really a science designed for railway practice? The answer can hurt…

Alexander Doll, head of Deutsche Bahn’s Güterverkehr und Logistik division, explained in 2018 that« there are significant differences between the two areas [ed. note: logistics and rail], for example in terms of the type of customers, the scope of the network and the investment cycles. DB Schenker has completely different investment cycles in road, air, sea and contract logistics than those of rail freight. The shorter the investment cycles, the faster the innovation cycles, the faster new ideas can prevail. » A reality that goes against railway theories and which reminding the lamentable episode in France about the Perpignan-Rungis train. For his part, the boss of the Schenker group, Jochen Thewes, explained to the Handelsblatt a year later that « The Schenker logistics group has been part of Deutsche Bahn for two decades, but has never really been part of the railway family. » He continues: « we actively propose the integration of rail transport, it is even a priority. But the customer is often primarily looking for speed and flexibility. In terms of price, the truck is often the most attractive solution, especially on short and medium distances.» It really sums it up. At Deutsche Bahn, two worlds are therefore living side by side without any synergies…

The strategic plans of the railway group are even explicit of this. At DB Schenker Rail, a programme for the years 2014-2015 called the « Action Plan for Germany » focused primarily on increasing productivity in the rail sector. At the same time, DB Schenker Logistics launched its own ‘Governance at Land’ programme, which was used to completely reorganise the processes in the land transport sector, primarily the road sector. This has not escaped the attention of the Bundesrechnungshofes (BRH, the Audit Office), which recently wrote that « The logistics service provider (editor’s note: Schenker) is potentially in competition with DB Cargo’s own rail freight transport and is pursuing the goal of further increasing the efficiency of road freight transport ». This demonstrates that logistics is closely linked to road transport. With 450 million road journeys in Germany, the problem is obvious. The figures confirm: between 2007 and 2017, road traffic performance increased by 24 billion to 478 billion tonne-kilometres, according to the Federal Statistical Office. 72% of all parcels, pallets and containers now travel on German motorways and country roads. It really sums it up…

However, it must be noted that the word logistics does not seem to appear in large red strokes in the recent initiatives launched to reboost rail freight, whether French or European. Although we can of course list a certain number of examples of rail logistics successes, such as the Danone bottled water train in France or the València-Rotterdam refrigeration train, it must be said that the railways continue to manage theirs businesses only on old recipes. Of course, initiatives such as the contract between Mercitalia Rail and the steel company Marcegaglia steel group are to be welcomed, but whole sectors, such as mass distribution and especially e-commerce, seem to have completely turned their backs on the railways. Alexander Doll is not wrong when he talks about the slowness of innovation cycles: rail is simply in withdraw of logistics. Originally, railways were conceived as a social object, where the pace is slower than those who work for Amazon, for example, where the reactivity is very strong. Is the rail abandoned by industrialists? Some more agile operators are trying to turn the tide, such as the Italian GTS, which was able to win an Ikea traffic between Genoa and Piacenza, over a relatively short distance in Italy. Former historical companies, reconverted towards a customer orientation, such as the old B Cargo company which became Lineas, have also been able to reconfigure their traffic and massify their flows.

For years, dozen of memoranda calling for a reversal of this trend. Their particularity is that they all point in the same direction: politics. They talk over whole pages about CO2 and global warming, reminding us that there are 4.2 million heavy goods vehicles on European roads and only… 880,000 wagons. All this is correct, but has anyone thought for a second about integrating a logistic flow rather than waiting for political action?

Rail Freight Forward association expects to reach a modal share of 30% in 2030, in the midst of the e-commerce boom and… possible backs from various pandemics. E-commerce can clearly kill railway sector for a triple reason:

The railway is not adapted to this kind of consumption and for rapid flows. But it is true that :

Of course, a number of rail customers do not necessarily request additional logistics services, as they prefer to operate the sector themselves. Some operators also retort that logistics is a specific sector, which must be managed separately, especially with regard to warehouse management, and that there is not always a demand for more services. The chemical sector, for example, only asks to bring the wagons into the company, without other ancillary services. Large customers in the steel or automotive industries, for example, prefer to manage themselves the management of wagons on the company’s own tracks.

However, smaller enterprises that deliver between 50 and 200 pallets a week do not have a large goods yard or the means to operate up a warehouse. For these, the rail operator should be able to pool the pallets in a large (possibly automated) warehouse and place them in containers that will change wagons along the way. It is indeed possible to build a logistics flow if reliability and deadlines are respected. This means in particular:

Of course, reliability depends not only on the operator, but also on traffic management. Too many freight trains are put on hold and train path management is too rigid. The railway infrastructure is something very fragile: it doesn’t take much to stop railway traffic (nobody along the track, level crossing barrier collision, signalling failure…). These are known problems, but obviously do not find reliable solutions quickly.

The Italian Ambrogio Trasporti, an entrepreneur from Turin, based his block train logistics entirely on a fleet of 400 wagons and 1,300 swap bodies. This entrepreneur has been running its trains since the 1960s to Neuss (DE), Muizen (BE) and more recently Mouguerre (FR), near Bayonne. 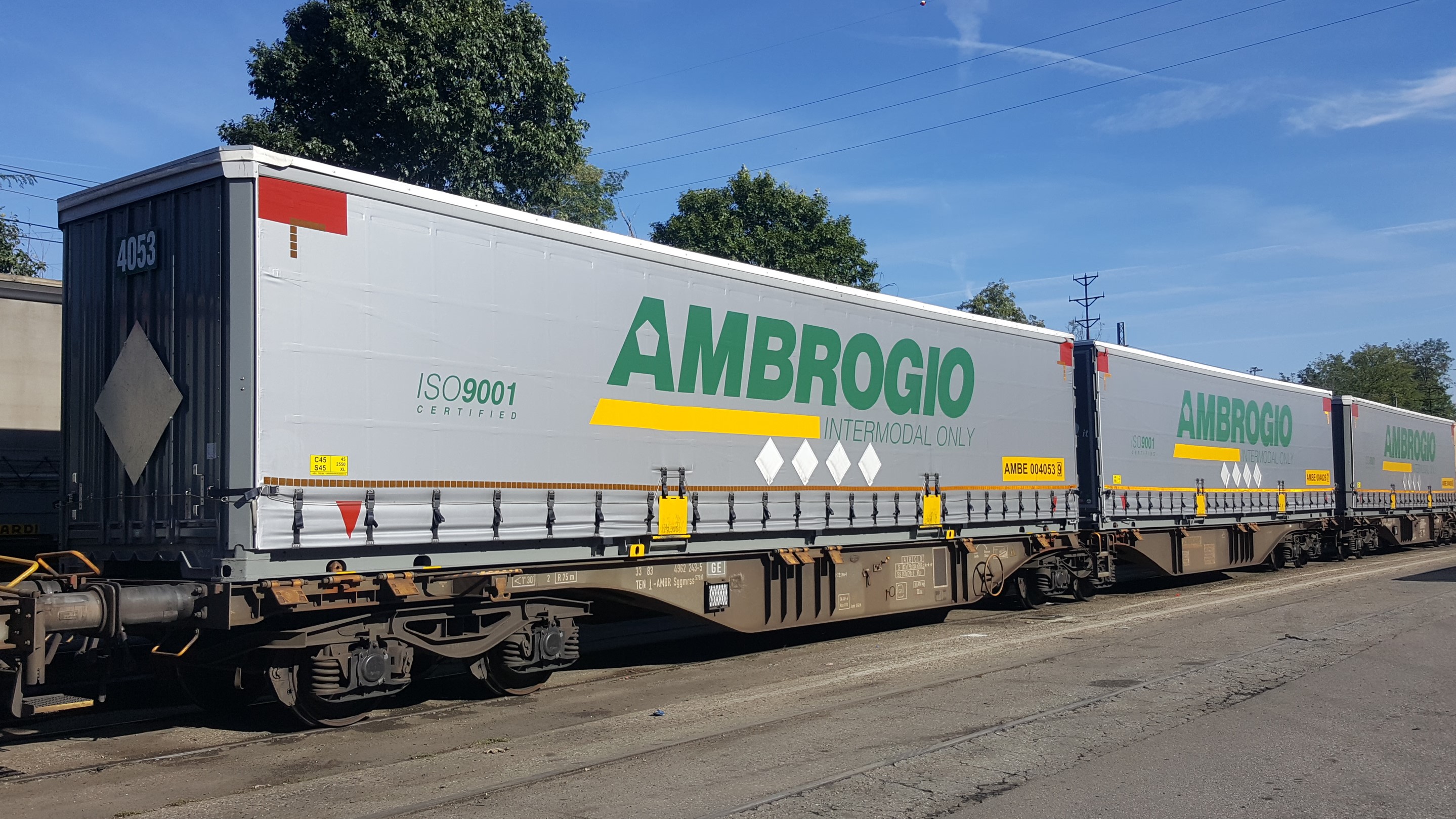 Ambrogio has now become ECM (Entity in charge of maintenance) for its fleet of wagons, and has its own axle maintenance workshop in Candiolo, its headquarters. The particularity of Ambrogio is that it does not offer its customers « the train product », but a concept of guaranteed flows without the customers having to worry about the mode(s) of transport used.

The company doubled its shipments by rail from 196,000 units in 2010 to 431,816 in 2019, which is a very good result considering the handicaps of rail operations. The company, which does not originate from the railway world, uses the privately owned Crossrail and TX Logistics for its trains, managing for example the 6 rotations Genk (BE) – Novara (IT), 3 Worms (DE) – Novara (IT) or 3 Rostock (DE) – Novara (IT), and others.

When a Turk wakes up the little port of Sète (France)! This Mediterranean logistician, worried by the social atmosphere of Marseille, t first made a name for himself in Trieste before opening a second line to France. Created in 1990, the Turkish group Ekol operates a fleet of 5,500 « grey cards », including 3,400 semi-trailers and 6 ro-ro ships (Ro-Ro, Roll-on/Roll-off), with a staff of 6,500 people. Every week, Ekol operates 48 intermodal trains in Europe, connecting with 2 Ro-Ro maritime services from Izmir, Mersin and Yalova, one to Trieste and the other to Sète. The Ro-Ro service to France allows the unloading of up to 180 semi-trailers.

We can also mention the Dutch company Unit 45 and its reefer containers, which we mentioned earlier, and which is used on Valencia-Rotterdam, which seems impossible on Perpignan-Rungis (Paris). The problems of this train, a french icon which is the last train using real reefer wagons, is mentioned on this article.

Growth of the rail’s market share cannot be achieved through large and sophisticated communication or beautiful power-points. The construction of industrial flows is essential to fill a train. For average volumes, why not massify with several customers having the same destination area. Rather than an expensive sole terminal, the best thing is to build yourself one or more warehouses in the immediate vicinity, making the terminal profitable. This is the policy pursued in Dourges, in the Hauts de France region, or in the Dirft region in UK, for example. The Polish company Clip has also done it recently, by investing in its own wagons… How the modular freight wagon is the future of rail freight
10/19/2020 – Freight wagons have the particularity of responding to a specific industrial sector, such as chemicals or wheat. But the negative side of this specialization is that it leads to mono-use which causes empty returns. The modular wagon avoids this.

When Hamburg has its own railway company to the hinterland
26/11/2018 – Hamburg is the full shareholder of the intermodal rail operator Metrans and can to affirm its position on the European scale.Metrans AS is a Czech operator that operates combined transport trains and container terminals. The company was founded in 1948 (originally as an international transport company) and is headquartered in Prague. Its shareholder today is Hamburger Hafen und Logistik (HHLA), who has become the sole owner since April 1, 2018.

Trieste harbour : an example of intermodal transport
03/10/2018 – We do not talk much about the Italian port of Trieste. And yet, it is wrong to forget it. It presents one of the best examples of multimodal transport in Europe. A visit.